If you have not read Part 1 yet, please do so first.

Are you ready to not just finish the PARE test but be competitive in it? In this article we approach training with a little more long term strategic planning.

If we have 2 or 3 months (more is even better!) to prepare for the PARE test it will be wise to spend some time building a base of strength as well as practice the test events. While cardiorespiratory fitness is important, it is often mistakenly given too much of a training priority. Even doing higher intensity interval work, while better than going for long jogs, still does not address a very simple issue. That is, being strong and powerful goes a long way to make all the testing criteria easier and less maximally demanding. And the best way to get as strong as possible in a short amount of time is to spend time with the barbell. This is not to say that cardio is not important, it is to say that if you are not strong it is more important to gain strength first than to gain endurance. For example, if the test requires the candidate to carry a 30-50lb tool or wear a 20-60lb pack and the candidate finds those to be challenging and heavy tasks then the candidate is simply not strong enough. Preparing by doing 30 minute interval/jogs and bodyweight calisthenics or doing the next 6-week boot camp is not enough to get strong.

This article suggests building strength and power for as much time as possible prior to the test using an efficient and sustainable method. Then intelligently bring up the specific conditioning after a reasonable base level of strength has been established. There is no other method more effective at this than using a barbell to learn and train a handful of basic compound lifts like the squat, deadlift, press, bench press, and power clean. Add in training the chin-up/pull-up and one has a solid foundation on which to build significant strength and power. Those attributes can then be put to use in effective conditioning that will result in a successful test, and ultimately in the performance of the job itself! An argument could be made that being strong will also better prepare you for various demands of the job more so than frequently running 3-5 miles at a time.  Using movements like the squat, deadlift and press are also effective at determining whether one is actually strong or not. How strong is strong enough? Ascribing specific values is tricky business, however if the candidate is not able to press overhead 55-60% of bodyweight (45-50% for females), squat bodyweight or deadlift 125-150% bodyweight the candidate is not strong enough. Take a moment and do the math. These values do not mean to compare with athletes who are active in strength sports and do not require the same level of commitment in training to achieve them. They are attainable by almost anyone willing to learn how to lift and invest a few months of putting in time to develop the strength and muscle that will improve all other athletic demands and pursuits. And with much less effort to maintain than it took to build in the first place! For a 150lb female, earning a 200lb deadlift is achievable and will also make picking up and carrying a 80lb sandbag both safer and less taxing. 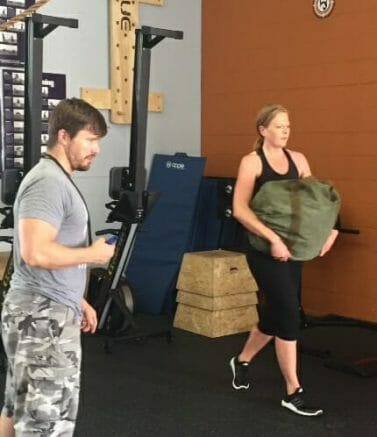 “The deadlift also serves as a way to train the mind to do things that are hard.”

The basic technique for the barbell lifts can be learned over several sessions when taught by a competent coach. In fact, hiring a coach to teach the lifts is a sound investment. Adding weight to consistent lifting technique over a lengthy period of time is ideal. It is more sustainable than trying to go as heavy as possible and it is safer too. That is why it is better to start preparing sooner than later with as much time as possible in order for the body to develop the strength it will find useful when the time comes that it is needed.

Part 3 will suggest some training specifics for getting stronger.

The author has 9 years experience as a volunteer firefighter and 13 years as a career firefighter, having competed in numerous recruitment competitions himself and maintained a high level of job-related fitness. In addition, he has prepared other candidates for various recruitments and subsequent fitness for duty. Contact [email protected] for a FREE No Sweat Intro if you need help preparing for a recruitment competition.

The last 18 months have been hard on us all, due to the pandemic, and many of us have let our habits slide. THAT’S OKAY!…

10 Strategies to make it through Thanksgiving gatherings without feeling guilty

Something as fundamental as nutrition should NOT be complicated and should focus on a simple, habit – based approach. You don’t have to be perfect…

It is safe to say that a year ago we would not have imagined living like we are in a dystopian movie. While we are…

Book a free intro today so we can learn all about you, your goals and how we can help you reach them
Free Intro